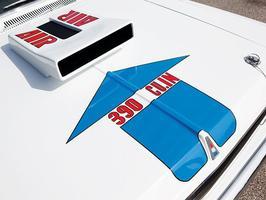 Hood scoops became a necessity on muscle cars of the 1960's and 1970's as the monster V8 engines powering these vehicles needed cooler air. Pontiac found early on that making the hood scoops functional and funneling cooler air to the carburetor gave a dramatic boost in power. Things just kept getting bigger after that.